The life of Enoch Adejare Adeboye is a fulfillment of the scriptures in Zechariah 4: 10 which declare, “despise not the days of small beginnings.” Born in 1942 into a humble family in the village of Ifewara, Osun State located in the South-western part of Nigeria Enoch Adeboye often humorously states that his family was so poor that even the poor people called them poor. As a matter of fact, he unashamedly tells his congregation that he never owned shoes until he was eighteen years of age. What he possessed though were physical intangibles such as focus, consistency, diligence, ambition, a brilliant mind and a determination to succeed in life.

In 1956 Enoch Adeboye was admitted into Ilesha Grammar School, Ilesha, Osun State, Western Nigeria and as a youth he discovered a passion for books, and an aptitude for science and in particular the field of Mathematics.

This led to an academic journey in the field of Mathematics against incredible odds including but not limited to finances, the Nigerian Civil War and academic politics. By the time he was done, Enoch Adeboye had obtained not only a Bachelors (BSc.) degree in Mathematics from the University of Nigeria, Nnsukka, Nigeria in 1967, but also a Masters (MSc.) Degree in Hydrodynamics and a Doctorate Degree (PhD) in Applied Mathematics, both from the University of Lagos, Lagos, Nigeria in 1969 and 1975 respectively.

One of the motivations for these academic achievements was Enoch Adeboye’s passionate desire to become the youngest Vice Chancellor (University President) of any one of the frontline Universities in Nigeria. It did seem that his academic ambition would be realized as his academic career flourished. However, this was not to be as a greater career awaited him in the service of the Lord. 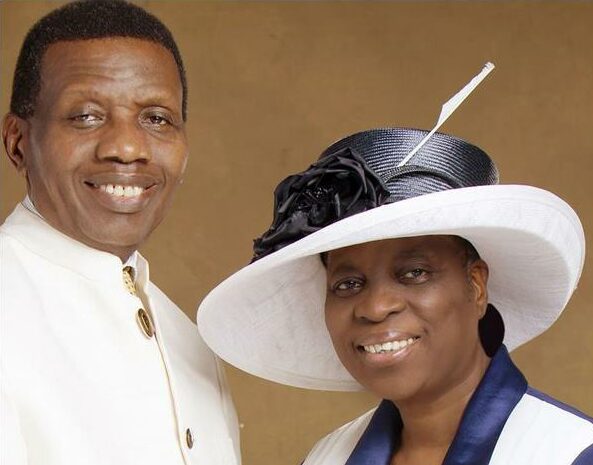 Growing up as a nominal Anglican (Episcopalian), Enoch Adeboye had a vague knowledge that God existed in heaven but did not have or know that he needed to have a relationship with him until 1973 when together with his wife he walked into a most unimpressive building seeking divine intervention from personal challenges.

This was the only premises at the time of The Redeemed Christian Church of God (RCCG).

The church RCCG was founded by Revd. J. O. Akindayomi, a man who though was illiterate had been supernaturally endowed with the ability to read the Yoruba (a native Nigerian dialect) version of the Holy Bible (translated from the Authorized King James Version). Even though both the environment and the Pastor (the founder himself) seemed unlikely to have anything to offer to a man of his status, Enoch Adeboye was unusually inspired and touched by the Word and also by the presence of God.

On that very day, Enoch Adeboye committed his life totally to the Lord Jesus Christ and has since not looked back.

In 1973 Enoch Adeboye received the Lord Jesus as his personal Lord and Saviour, joined RCCG and became baptized by immersion in water. Unknown to him though, the Lord had already informed the founder that “a man of books” (a highly educated man) would soon join RCCG and eventually take over the mantle of leadership from him (the founder) whenever he passed away.

As Enoch Adeboye joined and became an active member of RCCG, the founder began to personally mentor and groom him for the future assignment he was totally unaware of. He initially served as the sermon interpreter to the founder (from the native Yoruba dialect to the English language) and later was ordained a Pastor.

In 1977 when he was ordained a Pastor in RCCG, Enoch Adeboye manifested an incredible passion for the work of the Lord, pioneering Bible Study meetings, Crusades, Revivals, Outreaches and the evangelistic programs known as the Congress. These were very successfully conducted in various cities all over southwestern Nigeria.

By the time the founder passed away in 1980, RCCG had about 42 Parishes and this in those days was a great achievement. Although the founder left a sealed document pronouncing Enoch Adeboye as the succeeding General Overseer, his transition into office was not smooth but met with some resistance.

In 1981 Enoch Adeboye was ordained the General Overseer of The Redeemed Christian Church of God. With time, Enoch Adeboye’s results could not be denied. With a childlike faith in the efficacy and power in the Word of God, his passion was to live a life of holiness and teach others to likewise live holy lives.

Of course the appointment as General Overseer immediately terminated all academic ambitions and Enoch Adeboye set his heart on taking RCCG to the next level of ministry.

He introduced innovations into the ministry and in particular sought means whereby the elite in the society and professionals could experience ministry in a manner to which they were accustomed without compromising in the worship of God in Spirit and in truth. This led to the establishment of the “Model Parishes” through which countless millions in the upper echelons of the society have come to know the Lord. The poor, needy and downtrodden have not been ignored, as Enoch Adeboye has a deep compassion for souls.

Soon after the innovations came the Holy Ghost Services in the mid nineteen-eighties which featured a night of Praise, Worship, Prayer, Soul-winning, Deliverance, Testimonies and the Word once a month.

Initially held on the premises of the Headquarters in Lagos space constraints required a change in location. This led to the purchase of a massive piece of uninhabited forest land located on the outskirts of Lagos, a haven of highway / armed robbers and kidnappers with a great company of pythons and wild animals.

Enoch Adeboye moved his family to this “wilderness” he called the Redemption Camp, constructed a large auditorium and began to hold the Holy Ghost Services there.

To the glory of God, these services have been consistently held for over twenty years now and today, the crowds in attendance run in the millions every month. From the Redemption Camp, Enoch Adeboye faithfully travels many miles to work in Lagos and also ministers all over the world.

On 18th December 1998, Enoch Adeboye hosted the very first Holy Ghost Festival (open air meeting) in Nigeria with an attendance of over seven million people (CNN estimate). This most ambitious project in the form of an open air Worship Service was carried out in Lekki, Lagos, Nigeria and in attendance were over seven million people as confirmed by the CNN aerial satellite. Not one person was lost or died in that throng and this feat was repeated the following year. In 1999 though, there were no less than twelve million worshippers present.

This program has since been replaced with the annual 3-day Holy Ghost Congress held every December at the Redemption Camp. In addition to this is a Special 3-day Holy Ghost Program held in the first weekend of March yearly. At each and every one of these events, miracles, signs and wonders have become commonplace as the power of God moves freely to set free, heal, anoint, deliver, bless and empower.

Enoch Adeboye’s trade mark of humility is disarming and this endears him to people, enabling him to easily share his testimony of the Gospel. His passion for soul-winning feeds his passion for church-planting and through this, countless thousands have been inspired to follow him and likewise serve the Lord in the ministry.

From that unimpressive building he walked into in 1973, the Lord has today through Enoch Adeboye built a Mission of over five thousand Churches all over the world (Nigeria, almost all the nations of Africa, the US, the UK, Canada, South America, the Caribbean, Europe, Australia, India, China, Hong Kong, the Far East and even the Middle East). In the United States alone there are over five hundred Parishes and still increasing.

For several years, he has been honored to serve as Pastor and / or spiritual counselor to Heads of States, Ministers, political leaders and national decision-makers. At the same time, he endeavors to travel to minister in unreached places where others will not go.

To date, all over the world Enoch Adeboye has been conferred with several honorary degrees and national merit awards in appreciation of his contributions to humanity. In the 2009 Newsweek Elite Edition (January 5, 2009), he was listed as one of the Fifty Most Influential People In The World (No. 49 to be exact). For example the following are note-worthy:

2009 – Led the Pre-Summit Prayers at the 64th General Assembly of the United Nations, Headquarters, New York.

2009 – Named one of ‘The World’s Fifty Most Powerful People’ by Newsweek Magazine (USA).

Though the above achievements are phenomenal, Enoch Adeboye never fails to give glory to the Lord, claiming that there are greater things ahead that the Lord will yet do.

We use cookies on our website to give you the most relevant experience by remembering your preferences and repeat visits. By clicking “Accept All”, you consent to the use of ALL the cookies. However, you may visit "Cookie Settings" to provide a controlled consent.
Cookie SettingsAccept All
Manage consent

This website uses cookies to improve your experience while you navigate through the website. Out of these, the cookies that are categorized as necessary are stored on your browser as they are essential for the working of basic functionalities of the website. We also use third-party cookies that help us analyze and understand how you use this website. These cookies will be stored in your browser only with your consent. You also have the option to opt-out of these cookies. But opting out of some of these cookies may affect your browsing experience.
Necessary Always Enabled
Necessary cookies are absolutely essential for the website to function properly. This category only includes cookies that ensures basic functionalities and security features of the website. These cookies do not store any personal information.
Non-necessary
Any cookies that may not be particularly necessary for the website to function and is used specifically to collect user personal data via analytics, ads, other embedded contents are termed as non-necessary cookies. It is mandatory to procure user consent prior to running these cookies on your website.
SAVE & ACCEPT